5 Tips for Cruising with Dolphins 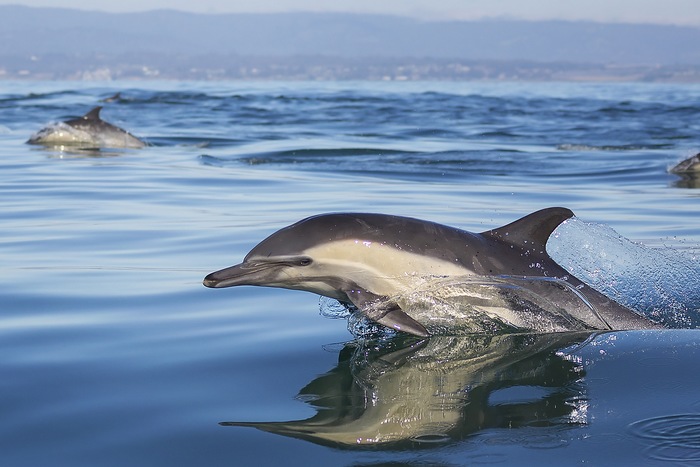 One of the ocean’s friendliest faces, the dolphin is known for its playful personality and extreme intelligence. And of course, its swift, lively movements on the water make it a thrill to see out in the wild!

In honor of National Dolphin Day on April 14th, we’re sharing a few fun ways to celebrate the day, as well as tips on how to share the water with these savvy speedsters. Take a look.

Start your cruise with a chat—dolphin chat, that is!

As you saw above, it’s pretty tricky to nail down the dolphin vernacular. What might sound like simple clicks, squeaks and whistles to us is actually a vibrant, complex language unique to dolphins—and while we don’t understand the language enough to actually use it, we can still have fun trying! Young cruisers and sightseers will especially enjoy trying their hand at those classic dolphin sounds, especially as we celebrate National Dolphin Day.

While dolphins have long been the subject of scientific study due to their intriguing displays of emotion and intelligence, they have piqued our interest long before modern marine biology. For example, the Ancient Greeks—inspired by the majestic, marine mammals they would no doubt see in their Mediterranean homeland—had a soft spot for dolphins, and even considered them as the messengers of Poseidon himself.

Today, there’s a lot to learn about dolphins. For example, there’s a wide variety of dolphins depending on where you are in the world—in fact, Pacific Northwest boaters can head to the San Juan Islands to spot the sleek, black-and-white orca which is, indeed, a type of dolphin itself! Of course, when you think “dolphin,” your mind might jump right to the sleek, slender, friendly-faced bottlenose dolphins frequently seen off the United States coast.

One simple tip for spotting a dolphin? Know what to look for! When you study up on dolphins, you’ll learn that their dorsal fin, or back fin, is curved unlike a shark’s straight fin. They also tend to travel in groups called pods, but they can also be spotted solo.

Look for dolphins in unexpected places

Dolphins can be seen out in the ocean, but they can also venture much closer to shore than many people may think! One smart, easily accessible spot to search for dolphins is actually in a brackish river or intracoastal waterway that runs along the ocean.

Hop onto a kayak or paddle board

Pair your Chaparral cruising with fun on a smaller vessel, like a kayak or paddle board, to get even closer to dolphins when they’re near shore.

The best way to celebrate National Dolphin Day, and to see dolphins in the wild? Let them do their thing! As is the case with all marine life, moving slowly is a great way to not only see the dolphins in an up-close, personal way, but to keep them safe and stress-free, too. And if it looks like a pack of dolphins are chasing you on the water, don’t worry—you’re not being pursued! Dolphins actually love “bow riding,” cruising by the front of your boat, or hanging out in the wake much like a wake surfer might. If they cling onto your Chaparral, you’ve hit the jackpot—because there’s truly nothing like seeing these playful creatures in action.

It’s easy to see why dolphins are so beloved by boaters, anglers and sightseers the world over! In honor of the big day, be sure to share destinations where you’ve had luck spotting dolphins below.

Exploring Myrtle Beach on Your Chaparral

Bahamian Adventures: Where the Dolphins Are Closer Than You Think Cruising Fun on the Finger Lakes 7 Smart Tips for Boating in South Florida Chaparral's Guide to the 305
©2022 Chaparral Boats, Inc. - all rights reserved.