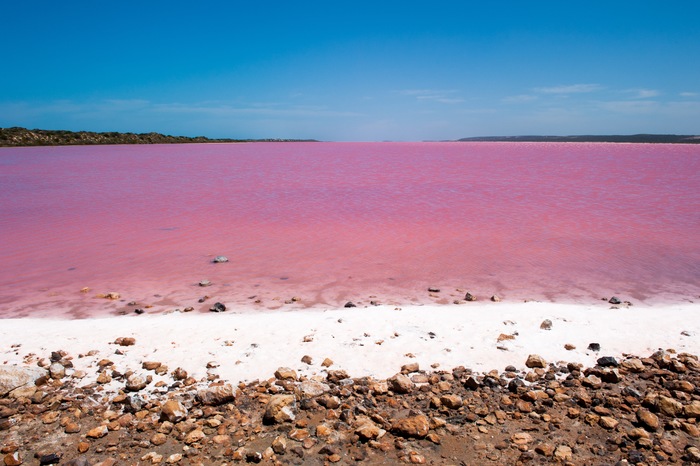 These are the words we’re used to hearing in association with the world’s lakes—“Pepto-Bismol” or “bubble gum”, not so much! But a cluster of lakes in Western Australia defy the norm and exhibit vivid, baby pink waters nonetheless.

What’s the cause of this color conundrum? Take a look at today’s blog to find out!

The aptly-named Pink Lake looks exactly like you might guess—a stretch of pink water as far as the eye can see, capped only by slopes of green terrain at the 245-acre lake’s borders. While the lake’s salinity prevents the abundance of aquatic life, it is a crucial home for at least one species—the banded stilt. At times, more than one percent of the entire bird’s population can be found at Pink Lake!

Lake Hillier is another pink body of water that is, if it’s possible, even more remote than its Western Australia neighbor of Pink Lake. It’s located by the end of the continent, separated from the expansive Southern Ocean only by a thin coast of sand dunes and vegetation. The picturesque setting is as quiet as it is beautiful, since the lake’s only life forms are of the microscopic sort. While the lake’s waters are safe, getting there can be quite the journey, and many opt to see the view from above instead.

Both of the lakes are safe for swimming—but how? The answer lies in the color—it’s not sludge, or pollution, or a mysterious discoloration, but a simple result of reactions between Dunaliella salina (a micro-algae) and a salt crust filled with halophilic bacteria—both combine to produce a reddish dye, the coloring the lake is known for. In the case of Pink Lake, there is also thought to be brine prawn in the water—the same crustacean that gives flamingos their famous pink hue.

The salty nature of these lakes makes them less-than-suitable for fishing—but we think they’re still a view worth beholding! They might just be some of the most unique bodies of water you’ve seen yet.

Be Inspired: The On-the-Water Spots That Sparked Creative Genius