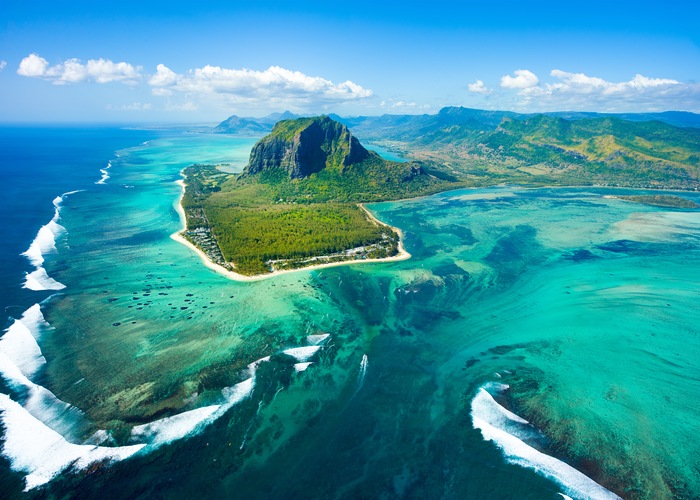 Can a waterfall flow beneath the surface? One sparkling destination in the island nation of Mauritius seems to prove it can! But are things really as they seem?

We’re diving into this unique marine mystery in today’s blog!

The prospect of an underwater waterfall is sure to throw anyone’s knowledge of physics for a loop. How is that even possible?

Short answer? It’s not… at least, not in the traditional sense, though a patch of water off the coast of Denmark is home to a fast, downward-moving stream of dense water that might fit the bill. The apparent underwater waterfall that’s been making waves recently, however, is located in Mauritius. Aerial shots of the island’s southwest corner reveal the scene in question, a sparkling turquoise expanse where lighter, brighter water appears to flow down into the darker depths below.

The explanation for the scene is, ultimately, a bit of an optical illusion… albeit a convincing one! As it turns out, the area off Mauritius’ coast is home to ocean shelves, or cliffs, of varying elevations. Unlike the water off, for example, Florida’s southern coast, the elevation here drops off rather suddenly. You’re seeing currents of sand and sediment flowing downward off that shelf and into the depths, but it’s not necessarily the gushing waterfall its appearance suggests. Still… it does make for quite the majestic sight!

On-the-water thrills at the heart of paradise

There’s more than this apparent waterfall to love about Mauritius’ coasts! The island destination, which is located east of Madagascar, is also known for its water sport offerings. When you’re in the area, you can enjoy excursions over those turquoise expanses via wakeboard or a pair of water skis. And of course, you can’t pass up the chance to snorkel in those clear blue waters!

The fun doesn’t stop on the water. Once you’re searching for a chance to dry off a bit, your best bet is to enjoy a leisurely walk onshore at a destination like the Sir Seewoosagur Ramgoolam Botanical Gardens, where oversized water lilies and other lush vistas are sure to “wow” your whole crew.

With beauty, natural splendor, and a wealth of on-the-water opportunities to savor, Mauritius is an island paradise whose intrigue extends far below the surface… literally!