Discovering the Splendor of the Sounds 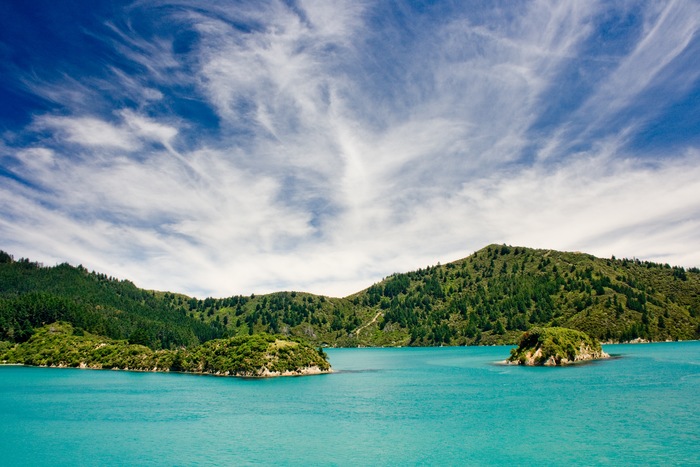 Dreaming about warm weather and endless days on the water? Perhaps all you need is a change of perspective. Or hemisphere.

Down in New Zealand, sunny summer air abounds, creating the perfect backdrop to your warm-weather escape. In this island nation, you’re never far from a beautiful body of water to explore—but when it comes to finding the best of the best, there’s nothing quite like a trip through the Sounds. The Marlborough Sounds, that is.

Stemming from the northern tip of New Zealand’s South Island, the Marlborough Sounds are a wide, winding collection of sea-drowned valleys, known for lush shorelines and pristine blue water throughout. They’re home to some of New Zealand’s most treasured species and recreational opportunities, and offer passage to everything from waterskiing to wine-tasting.

Packing your bags already? Read on to learn more about this one-of-a-kind escape, perfect for your next Chaparral cruise.

The mystique of the Sounds

The Sounds are more than just a picturesque destination—they are steeped in culture and history, too. Maori legend tells that the intricate network of waterways was formed when Te Wheke, an octopus, was killed by a local leader named Kupe in retaliation for the octopus stealing all the village’s fish. Te Wheke fell onto the land, his many tentacles carving gashes into the Earth and submerging pieces so that the water flooded into them, creating the navigable valleys you see today.

In addition to serving as a legendary site, the Sounds also played a role in New Zealand’s history of exploration. One of its most famous features, Ship Cove, was named by the English Captain James Cook in 1770 when he stopped here on a Pacific voyage, restocking supplies and establishing a makeshift settlement on land. It was one of the first European encounters with the island.

Our favorite way to get around the Sounds is, naturally, by boat. Take a look from above and you’ll see why—the Sounds carve into a smattering of islands toward their north end, small coves and rocks and bits of land you’d never be able to see up-close otherwise. A leisurely cruise up the Queen Charlotte Sound is a great way to begin, as it offers you passage to beautiful hideaways like Governors Bay or Flippers Bay; Kumototo Bay is another great spot, accessible only by boat, ideal for fishing and equipped with a waterski lane for when you’re ready to hit the water on your own two feet.

Speaking of waterskiing—it’s a go-to activity here in the Sounds. The waterways’ wide, gently curving channels are practically built for those wanting to carve in some choice on-the-water action. Waterski lanes abound for this express purpose, and they can be found in many spots including Kaipakirikiri Bay, Davies Bay, Cherry Bay and beyond.

Another great on-the-water activity is wildlife spotting! Keep your eyes peeled for dolphins, who enjoy riding in boats’ wakes (you can even book swimming time with them during your trip), as well as an abundance of birds. The King Shag, in particular, is one you’ll want to see in person—the truly one-of-a-kind bird, characterized by a slender black and white body and colorful, quizzical face, is native to the Sounds and lives only here.

For a new kind of adventure, you can even hop aboard a kayak and explore smaller, out-of-the-way spots such as Okiwi Bay. You’ll enjoy the glossy, reflective surface and the backdrop of scrub-lined crags that play host to some of the Sounds’ most interesting wildlife.

A taste of luxury

Of course, we can’t forget about one of Marlborough’s most treasured exports: its wine. The region’s coastal climate—which is bright and sunny yet mildly cool—lends itself to a renowned reputation for grape-growing. Sauvignon Blanc, in particular, is a favorite here. Once you’re done cruising for the day, and are ready to spend the night at one of the charming resorts that overlook the Sounds, treat yourself to a glass… and toast to even bigger adventures tomorrow.

If a down-under destination tops your 2019 bucket list, take a trip through the Marlborough Sounds. The dreamy, idyllic waterways create the perfect backdrop to boating adventures big and small, so take your time and enjoy a leisurely pace as you make your way around. There’s nothing quite like the splendor of the Sounds!

5 Must-Do Foodie Destinations By the Water

Boosting Your Boating Smarts at the Miami International Boat Show

Cruising Fun on the Finger Lakes Cherry Blossoms in Washington D.C., Chaparral Style Say Ahoy! How to Talk (and Boat) Like a Pirate Discover One-of-a-Kind Homes on the Water
©2022 Chaparral Boats, Inc. - all rights reserved.