Say Ahoy! How to Talk (and Boat) Like a Pirate 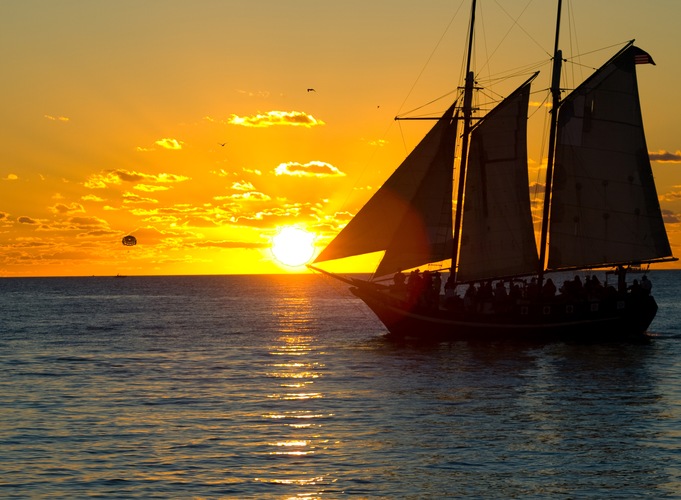 For many boaters, the pirate lifestyle has long been an intriguing one…

Think about it—a life on the water, where days are spent exploring new destinations and every trip brings a new adventure. Minus the plundering, it sounds like a dream come true.

Well, you might not be able to give up the “landlubber” life and embrace your pirate persona entirely, but you can certainly incorporate some habits of the high seas into your routine.

Read on as we share a few key pirate phrases to learn today, as well as some of our favorite pirate-inspired destinations to visit on your seasonal travels. Take a look.

Want to brush up on your pirate lingo? To truly immerse yourself in the persona (while you’re on the water, at least!), here are a few key phrases you’ll want to know…

- Ahoy! – Use to say hello to a friend on the water, or to point out something exciting (land, a whale, a waterfront café, whatever that may be!)
- All hands hoay – The pirates used this one to get the whole crew on deck and ready to work. You might use it to get the family gathered together before cruising off—boating is a team effort, after all.
- Poop deck – This refers to the back (and typically highest) part of the boat. On your Chaparral, you’d call it the transom. Mix the two up to get in the spirit on the water!
- Walk the plank – Walk off the boat as a punishment! Unlike those pirates of yore, you’re probably not leaving any of the crew behind—but when your boat’s not moving, it can be fun to have the kids “walk the plank” off the swim platform in pirate-inspired fashion.
- Landlubber – Someone who is not accustomed to life on the water. Don’t worry, we were all landlubbers once—the key to getting your sea legs is simply spending more time on the water!

Now that you’ve nailed down how to talk like a pirate, it’s only natural that you boat like one, too! As it turns out, those legendary pirates certainly gave us plenty of places to seek out and enjoy in the pursuit of retracing their steps.

And of course, when you think “pirates,” you think the Caribbean—a shimmering sea that marked passage into the thrills and discoveries of the (then) New World. From here, our journey begins.

You can’t cover old pirate stomping grounds without mentioning Port Royal, Jamaica—perhaps the center of it all.

Today, you may know Port Royal as a small peninsular village that juts out into Kingston Harbor—a destination you pass as you cruise through those sparkling Caribbean waters. But through the 17th century, it was much more—one of the region’s largest cities and a center for commerce. But where commerce happened, pirates followed, and eventually Port Royal came to be known as a pirate haven.

What happened to this bustling buccaneers’ capital? In 1692, an earthquake (and accompanying tsunami) shook the port’s foundation, causing its sandy structure to liquify and flow into the ocean. The once-thriving Port Royal was no more, though much of its remnants can be found beneath the surface to this day, earning the city the nickname “The City That Sank” and adding a layer of mystique to the region. Archaeologists call the Port Royal remnants some of the most significant findings in the world—but an allure pervades above the surface, too, thanks to the tranquil beauty of Jamaica and Kingston’s turquoise waters.

A perplexing blend of pirate history, legend and island splendor characterize the boating experience here—the likes of which that truly can’t be found anywhere else in the world.

We’re heading north to Key West for the next stop on our pirate adventure. Jutting out into the Florida Straits, the island provided easy access to the greater waters of the Caribbean—making it a natural pit stop for pirates during their Golden Age.

Just which pirates visited—and when—is not clear to modern historians, but the island’s location and relatively deep harbor suggest the makings of a pirates’ sort of place. As you cruise the pristine waters here, and venture off the beaten path, you’ll discover the sort of out-of-the-way island paradise the pirates did: a seemingly endless horizon of vivid H2O, interrupted only by bird calls and mangrove clusters just offshore.

Far from the hustle and bustle of civilization back on shore, you’ll almost feel as though you stumbled into a rich, pirating past, well-preserved through the centuries.

Of course, back on shore, the pirate spirit continues. Whether you’re dining out at the Pirate’s Cove restaurant or exploring maritime history at the Shipwreck Museum, you’re sure to learn something new about this southernmost isle: Key West really loves its pirates!

As America’s oldest city, you know the port of St. Augustine’s seen a lot—including, of course, the comings and goings of pirates! At the time of its founding, there was no America, no colonies— just a New World that was busy being explored by many key players from Europe, including pirates who would come to plunder this growing gem of Spanish settlement in the West.

To this day, you can see St. Augustine’s attempts at keeping those pirates (and other intruders) at bay, such as the Castillo de San Marcos, a fortress which overlooks the scenic Matanzas Bay and lends an antique feel to the shores of St. Augustine. As you cruise by, you won’t be cruising past Florida—or at least, not the Florida you’ve come to know! Here is a slice of Florida shoreline rooted in a legendary past—from its fortress to its quiet, intriguing coast and a downtown filled with historic buildings (and even its own Pirate & Treasure Museum), St. Augustine is another experience altogether, one that’s certainly worth pursuing as you live the life of a pirate.

A pirate-inspired cruise around the Caribbean is a fitting way to indulge your swashbuckling side— but it’s not the only one! Whether you dress up your Chaparral for pirate-themed fun or get a head-start on your captain costume for Halloween, there’s never a wrong time to enjoy the spirit of adventure so famously attributed to those voyagers of the deep.

Cruisin' the Intracoastal: A Breezy Guide

Chaparral's Checklist for Boat Show Fun Make the Most of Boat Show Weekends In 2019 The Universal Language of Boating 5 Tips for Even Better Boat-In Camping
©2022 Chaparral Boats, Inc. - all rights reserved.